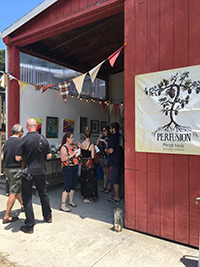 Join us for the release of our 2017 Pinot Noir and a celebration of our appearance in the August issue of The Wine Enthusiast as an Editors Choice. Happy dogs and kiddos welcome! Also appearing will be bluegrass band Mission Blue.

Produced from grapes sourced from an estate vineyard in Wildcat Canyon on the eastern side of the San Francisco Bay AVA. Perfusion is a micro-batch label. Tom Leaf, the original Head Winemaker at Crush Pad (the San Francisco winery that pioneered the concept of custom-crush winemaking) crafted this boutique and well-balanced Pinot Noir. The brand’s owner is John Bry, a vascular surgeon whose grapevine label design mirrors the human vasculatory system. Dense notes of blackberry cream and violets are aromatic as well as flavored, and the bright berry fruit is lit from within. The mid-palate shows off ripe cherry and toasty oak.

The cool climate of the growing area shows in the translucent ruby color and a hint of heirloom tomato and cranberry that accompany riper notes of cherry compote, raspberry, and cocoa dust. A just-right touch of oak brings toasty cedar wood and vanilla bean. And something earthy: wild mushrooms, as well as a leathery, teriyaki beef note. Very attractive aroma, complex and inviting. All those olfactory elements show up in the mouth, very rich, long and satisfying. Spicy finish: cinnamon, clove, nutmeg, white pepper. Bone dry. The texture is just right: medium-bodied, some weight but an ethereal lightness, with gentle tannins. Fine acidity. All in all, an outstanding Pinot Noir, showing well now at the age of nearly three years, and with the stuffing to develop for another six years, at the least. This is certainly not rich and heavy enough for Russian River Valley, yet it’s not far Sonoma Coast either. Tasted blind I might have taken it for Santa Rita Hills, from a Highway 246 vineyard close to the ocean. I would happily score this 94 points.

Younger, fresher and more piquant, an immature wine dominated by acidity and tannins and therefore not as appealing as the 2014. Tight and aloof now, although it’s stuffed with raspberries and cherries—the family resemblance is obvious. I would drink the 2014 and cellar this for at least a year or two, but right now, the ’14 seems the better wine. Score: 91 points.